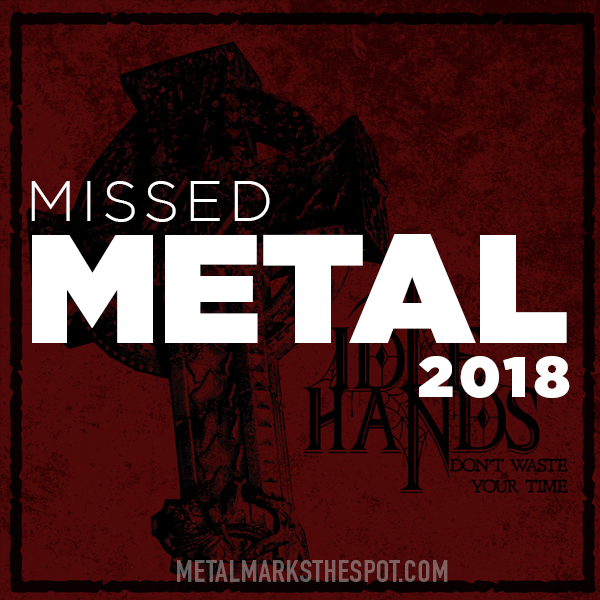 I’ll never hear everything, or even be aware of half of all the metal that comes out in a year, which is why I love list season so much. Undoubtedly, tucked away behind all the obvious list choices are usually some off the beaten path and absolutely fantastic albums that just got lost in the regular course of the year. So here are some the albums I missed throughout the year that I feel are worth your ears time:

Turnstile – Time & Space
Crazy ass, eclectic hardcore/punk that pushes the genre boundaries to the edge. Not sure why these guys aren’t blowing up or if I’m just so out of touch.

Paara – Riitti
Super Finnish black metal that veers on the cult-ish side of things as well as crafting beautifully melodic riffs and songs. Like a mix between the Sargeist and folkier black metal.

Churchburn – None Shall Live… The Hymns Of Misery
Just unflinchingly nasty, black, death, doom, sludge all fucking stirred up and spilled out into your fucking ears.

Primal Rite – Dirge of Escapism
Crossover hardcore/thrash that is all get up and go. Similar to Powertrip if Powertrip had more punk in them. Nothing spectacular but solid and fun.

Slaves BC – Lo, and I Am Burn
A Sludge base with a coating of black metal and hardcore and a dash of avant-garde experimenting. Cool at parts, middling at others, but kudos for trying something new.

Idle Hands – Don’t Waste Your Time
Imagine, if you will, that you’re a more traditional metal band without a singer then one day during rehearsal some Killing Joke obsessed goth dude walks in and starts singing. That’s Idle Hands. It’s heavy metal with goth on top of it but not like goth metal. It’s like two separate ideas that work amazingly well together. Super Killing Joke and super Paradise Lost inspired and super awesome.

Boss Keloid – Melted on the Inch
Some pretty fun, sludgy doom stuff with some funky, psychedelic, proggy elements. Not too shabby.

Pagan – Black Wash
Holy fuck, this one is fucking furiously awesome. It’s like a combination of blackened rock n roll, with all the groove and swing of it but mixed with some post rock elements and some of the best vocals I’ve heard all year. Vocalist Nikki Brumen is out there just fucking killing it. So much intensity in her vocals. This fucking rules.

Azusa – Heavy Yoke
This might be pushing a little far out of my wheelhouse with all it’s super technical timing and genre bending but there’s a creative energy here that I can really get behind and again, another amazing vocalist.

Rolo Tomassi – Time Will Die and Love Will Bury It
Super post metal. Moments of tranquil, beautiful compositions give way to incredibly intense and crushing moments. Drenched in soundscapes and levity, I do enjoy this kind of style when I’m in the right mood and I can see this album being a go to for that said mood. That being when I want gorgeous vocals and post atmosphere. It happens, sometimes.

Hangman’s Chair – Banlieue Triste
Really interesting and fun mix of doom, both traditional styled, and that cavernous, funeral-like style, synth/darkwave, 80’s pop/goth, and overtly being French. Love when bands can really blend styles together to make one seamless sound from things that you wouldn’t think work. This is killer.

Baptists – Beacon of Faith
I can’t get enough crust in my metal lately. Baptists mix it in with some hardcore, sludge, and a but if blackened stuff and a heavy dose of nature themes which all results in a fucking stomper of an album. Excellent.

Madder Mortem – Marrow
I can’t even summarize all that’s going on here so I’ll just say this is some highly progressive, post-metal-ish, tech-y, folky, bluesy, experimental metal that dips in and out of the extreme, with one of the best vocal performances of the year. Fucking excellent.

Unfelled – Beneath Distant Skies
Yet another project from the main man behind Woods of Desolation and just as good as all the others. This one is more of a low-fi, atmospheric, black metal style with hints of old Ruins of Beverast in there for a bit of some sinister quality, but like Woods and all his other projects, the majesty of his riffing and atmosphere really take center stage here, and he’s so fucking good at that.

Bloodbark – Bonebranches
Highly atmospheric and nature oriented black metal in the vein of Winterfylleth that borrows a bit from Summoning with their approach to grand song writing. A cool mashup of styles that makes for a pretty decent album.

Brainstorm – Midnight Ghost
Harder-edged, German power metal with no frills aside from catchy as fuck songs and triumphant vocals. A darker bend than most power metal but not all the way over the edge like a Powerwolf might go.

Karg – Dornenvogel
I’ve only ever heard Karg’s first album Von den Winden der Sehnsucht which is agruabaly an ambient black metal classic. Despite my lazy involvement with the band they’ve managed to release new music consistently since 2008 and have transitioned to a more “post” driven black metal band. Kind of like if Solstafir were more on the black metal side of post. I’m not sure how the albums in between the first and this latest release go but this one is an engaging listen with beautiful post and black metal moments all swirled together. A bit long, some editing would have helped, but maybe I was wrong to overlook Karg for so long.

Devouring Star – The Arteries of Heresy
This started popping up, surprisingly, on a bunch of year end lists and despite it being a Dark Descent release it managed to get past me this year. Dark Descent had an entirely prolific year and it was hard to keep up with them but I shouldn’t have slept on The Arteries of Heresy. This is a “Dark Descent” band ever ever there was one. Cult-like, menacing, dank, and creative black metal from Finland. Complex and interesting musical swirls through out, Devouring Star is bringing some fresher ideas to play here and not relying on tried and true methods and it’s such a rarity any more I need to applaud that in new bands. Foreboading-ly evil, this album will crush you.

Orion’s Reign – Scores of War
I think this is the last of the left over 2018 power metal releases I meant to listen to. Power metal of the symphonic quality. Pretty cheeseball and fun if nothing unique.

Abhorrence – Megalohydrothalassophobic
This is the Finnish death/doom band that supposedly predated Amorphis and contained various future Amorphis members including current singer Tomi Koivusaari. Yeah, this is pretty fucking good. Of course after over 20 years of inactivity they sound very much like an early 90’s death metal band from that region. Very riffy, very chainsaw-ish, but with a modern production sense and clear sound. I think it’s pretty rad as a weird curiosity and it’ll be interesting to see if this band can continue on this momentum or will the throw back sound only take them so far.