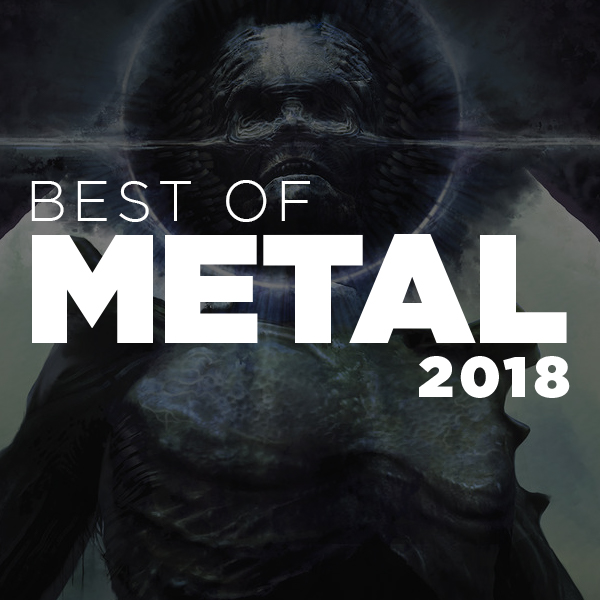 Fuck yeah, it’s that oh so special time of year… list time, jerks! The most fucking wonderful time of the year, well maybe not, but I sure fucking love list season. I’m always bowled over by how much stuff came out over the year, particularly albums I’ve missed, and I miss a lot. Even consuming as much metal as I do I miss a lot. Thankfully for the lists and metals enthusiasm for sharing killer bands I’m not left in the dark. Which brings me to my first point…

Despite my love of lists this years offerings, for the most part, were actually kind of repetitive and predictable. A lot of the same albums repeated on almost all the lists I saw, over and over again, with a couple “under the radar” options thrown in for good measure. Granted, a lot of those albums are fucking killer and deserve to be listened to, in their entirety, over and over, but they surely weren’t the only albums that were good this year. And just because I’m a list dork, here’s the obvious ones that I thought were particularly killer.

So, yeah, all of these bands put out killer albums this year that deserve the recognition, and I wanted to just briefly mention them but save space in my actual list for some newer and different stuff. Yob likely had my favorite album of the year but if you’ve looked at a list you’ve seen this on every one of them. Skeletonwitch keeps getting better and better with each album, Primordial still fucking rules, as does Evoken, Tribulation, Horrendous, Amorphis, Krisiun, and Hooded Menace. Judas Priest, Voivod, and Immortal, I think, defied expectations with just how fucking good their new albums were. Portal and Sigh, two the most strange and unpredictable bands predictably fucking ruled at being weird and totally unique. Sleep and High on Fire came in with the double attack of awesome but I’d be lying if I said I didn’t like that High on Fire more. While Zeal & Ardor‘s new album is so wonderfully refreshing and creative and unique, it’s on every list ever, and deserves to be, but it’s getting all the eyes on it.

25. Sargeist – Unbound
Sargeist pulled the ol’ “here’s our new album, surprise” trick with no hype or fanfare. Just fucking released it into the world, with an almost entirely new lineup, and they fucking crushed it. Not that they’ve every really had a dip in quality but Unbound was a fucking battle cry of classic Sargeist fury.

24. Kriegsmaschine – Apocalyticists
Following Sargeist‘s release tactic, Kriegsmaschine quietly released their new stunner and just let it drop like a fucking black metal rock made of pure excellence. I know MGLA is all the rage but based on how constantly killer Kreigsmaschine has been, and that is shares members with MGLA, I’m starting to think Kriegsmaschine might be my favorite of the two.

23. Vallendusk – Fortress of Primal Grace
Three albums in and Vallendusk show no signs of not releasing tremendous music. If your looking for vast, beautiful, uplifting, and hyper melodic as fuck black metal, Vallendusk has you covered completely.

21. Ancst – Ghosts of the Timeless
I’ve been drawn more and more to the crustier side of metal and Ancst is a band that’s been rapidly making it to the top of that pile for me. Socially conscious, melodically fierce, and ambient soundscapes make Ancst one of the most addicting bands you’ll hear this year.

20. Necros Christos – Domedon Doxomedon
One of the most interesting and fiercely unique death metal bands is calling it quits and decided to go out with their most ambitious and maybe their most masterful album to date. Two hours of amazingly vile, evil, spiteful death metal and weird religious interludes. That’s Necros Christos for you, and they fucking rule for it.

19. Master’s Hammer – Fascinator
Can we all just agree that everything Master’s Hammer does is fucking incredible? Good. The Czech black metal-er’s effortlessly continue long into their career with their unique, cult-like, rhythmic stomping like it’s as casual as tying your boot.

18. Ironflame – Tales of Splendor and Sorrow
Ironflame go full steam ahead with their straight to the fucking point power metal that takes equal cues from Iron Maiden, Dio, Helloween, and the bombastic intensity of American classics like Omen. Power metal without the frills and all the awesome.

17. Inferi – Revenant
Every year I say I don’t like tech death and every year I found and album that proves me wrong. Inferi do tech the way I like it: technical riffing and writing that serves the song and not to just show off. Insane melodic, catchy as fuck riffing puts this one leagues above most tech death this year.

16. Moonshield – The Warband
Moonshield flew way under the fucking radar until nearly the end of the year when their debut album just exploded in to my life. Combining melodic death metal, hardcore, punk, and fucking chip-tuning with the grand fantastical lyrical themes of power metal, Moonshield makes every band worshipping at the well-tread old school seem like slackers.

15. Rebel Wizard – Voluptuous Worship of Rapture and Response
I can’t get enough of Rebel Wizard. They’ve taken black metal, fused it with punk and NWOBHM, turned it on its fucking head and added a tongue in cheek wizard (yeah like Gandolf) narrative to the whole procedure. It’s incredibly enduring and infectious and I can get lost forever just jamming these releases.

14. Dodsrit – Spirit Crusher
Keep the crust/metal infusion coming! Especially with bands like Dodsrit who are using crust to inform their already beautiful atmospheric black metal soundscapes. The scope of this album is breathtaking, ushering Dodsrit to the top of the list of bands I feel I’m going to be obsessed with.

13. Eneferens – The Bleakness of Our Constant
Eneferens has only been releasing material for the past two years but this one-man project has skyrocket to the top of the emotional, atmospheric based. black metal pile.  On his newest album, Eneferens uses the familiar blue print of his highly emotive, atmospheric black metal style expands it to an almost ethereal plain of existence. Simply beautiful and captivating.

12. Deceased – Ghostly White
Fucking Deceased fanboy here so… Deceased fucking rule and the time spent without a new Deceased album in this stupid world was far too long. Lucky for us they showed up with a new album that just might be one of their best. Riffs and solos for days, King Fowely’s undeniable voice and drumming, death metal melody, and or course the horror drenched atmosphere and Deceased are doing what they do best, which is being Deceased through and through.

11. Esoctrilihum – Pandaemorthium (Forbidden Formulas to Awaken the Blind Sovereigns of Nothingness) / Inhuma
Not content with releasing only one incredible album, the french one-man band took everybody to town with his drive to create unique and essential metal. Esoctrilihum dwell in the nightmarish and avant-garde realm of metal, weaving in catastrophic levels of dissonance, technical musicianship and evil heaped on evil. Both albums are massive and creatively mesmerizing and a bleak vision that manages inspire hope for the future of metal looking to break barriers.

10. Death Karma – The History of Death & Burial Rituals Part II
Death Karma literally pick up right where their 2015 album left off with another set of songs focussed on death and burial customs from different cultures. That idea is so fucking metal it blows my mind and how Death Karma incorporates sounds and styles from each song’s country of origin makes it a work of fucking art. Put this one on with the first and get lost in it’s brilliance.

9. Lychgate – The Contagion in Nine Steps
Lychgate’s third album now cements them as one of metals most interesting acts. Instead of continuing the dismal blackened funeral doom of their previous album, Lychgate swing it around for a weird, evil, horrifying, alternate dimension funhouse of archaic horrors, progressive minded black/death metal. Profound in its creativity, every song is an adventure and you won’t want it to stop, content to just live this life of madness.

8. Funeral Chic – Superstition
This album is a fucking sheer rager. From start to finish it just fucking crushes. One blackened, hardcore, punk song after another with no fucking pretense, no fucking genre or scene bullshit. Just unadulterated face smashing metal. Fucking love it.

7. Hoth – Astral Necromancy
I fucking love how Hoth are both subtle yet incredibly not subtle about their band being Star Wars themed. It’s a brilliant tactic that doesn’t make the band easily dismissible like most gimmick bands and allows you to enjoy them even if you aren’t super in to Star Wars, which I am, so fucking win for me. Even with the Star Wars slant, the music and songs are more a creative reimagining of Star Wars concepts IE the struggle of good and evil, predestination, inner torment, all painted in a hyper melodic, yet bleak, black metal environment that is perfectly suited to the material, and to me, a Star Wars diehard, makes perfect sense. It’s not only one of my favorite metal releases of the year but my favorite Star Wars anything.

6. Dire Peril – The Extraterrestrial Compendium / Judicator – The Last Emperor
The two best power metal albums of the year came from the same dude, namely John Yelland. Judicator wove their Blind Guardian worship right into their sound instead of leaving it surface and made a power metal album that is full of bombast, grand ideas, and massive reach. And if Judicator is John’s Blind Guardian, Dire Peril is his Demons and Wizards. Dire Peril is no less grand but focussed in a more traditional approach and reveling in all things sci-fi. Both of these albums are what power metal needed this year.

4. Agrimonia – Awaken
I was floored by Agrimonia’s previous album and have been rabidly devouring their music ever since. Everything about his band just hits the mark for me. The vocals, the power, the anger, the melding of  crust, black, death, doom, and post into such a magnificently beautiful, melodic blast. Agrimonia is running circles around most new bands.

3. Panopticon – The Scars of Man on the Once Nameless Wilderness
If Panopticon releases an album it’s going to end up on my list. Such is the power this project has. Easily producing some of my favorite black metal albums, and I would say best black metal albums ever, Panopticon throws all in with a double album, half beautiful, melodic, nature focused, exploratory black metal he’s known for, half intensely personal, acoustic heavy folk songs. I’d be lying if I said I didn’t favor the metal side but both sides compliment each other perfectly or are completely strong enough to stand on their own. Panopticon is an American musical treasure, without a doubt.

2. Khemmis – Desolation
One of the joys about being in the Denver metal scene has been witnessing the meteoric rise of Khemmis. Their original NWOBHM flavore twin guitar riffed, doom sound continues to grow and mature as they seem to be unwilling to not top themselves with each release. Hunted was a mammoth album and one I didn’t think they could top. Then came Desolation.

1. Visigoth – The Conqueror’s Oath
Nothing was more metal than Visigoth this year. Nothing. A shining beacon of metal in its purest form, Visigoth stampeded in with such triumph and power it took the entirety of metal by the fucking throat and said “look fucking here, this is what metal can be.” No fucking politics. No scene bullshit. Just heavy fucking metal, played perfectly, sang majestically, and it’s just what we fucking need.

As if I could leave you without some honorable mentions. So many bands had tremendous years and remarkable albums and you’d do well to check these bands out as well: Sojourn, In the Woods.., Chapel of Disease, House of Atreus, Cultes Des Ghoules, Conan, Dream Troll, Antiverse, Violation Wound, Frost Giant, Panphage, Svalbard, Paths, Inexorum, Varathron, Sepulcher, King Goat, Wild Hunt, Beorn’s Hall, and Cult Leader.