You may be surprised, and I certainly am, that running this website sometimes gets me metal related perks like album promos and more recently it got me on the “guest list” for a power metal show. Victory is fucking mine! And not just any power metal show but Dire Peril, the band that has released what is probably the best power metal album of the year. I wasn’t even concerned that it was happening at a venue in Colorado Springs, the Focus on the Family, Christian Mecca of this state and a good hour away from where I live. So off I went, into the night, accompanied by my metal brothers in arms, to witness some fucking power metal.

The show was at The Black Sheep, which is a rad small sized venue which is essentially a stage, a room, and a bar. Stripped down and basic and perfect for metal. I saw Wolves in the Throne Room there last fall and it was amazing.

Local support was provided by Sabbatar and they certainly happened. We were there to see Dire Peril and though this was Seven Kingdoms headlining tour, it might as well have been Dire Peril’s. If’n you don’t know, Dire Peril is the second band of Judicator vocalist John Yelland. They’re the hardcore sci-fi power metal band to Judicator’s Blind Guardian inspired, historical power metal, and conceptually since Judicator does take a lot of inspiration from Blind Guardian, Dire Peril is like the Demons & Wizards to Judicator. More melodic yet rooted in more traditional riffing as well as the grand soaring scope and vision. And with that they fucking decimated the place. Power metal is a thing to behold live and stripped down in this form amongst a small crowd, it was magical. The band was super tight, and John’s vocals where tremendous. It’s hard to know what to expect from a power metal vocalist live, if they can match the production magic of their albums, but he did, sure enough, and blew our fucking brains out.

To be honest, that was really the show for us. I do enjoy Seven Kingdoms and their high fantasy cheesiness, but fairly casually. We stuck around for a couple of songs from their set and they were damn good live. Like a well oil power metal machine, but alas the drive was long and we’d had our world thoroughly rocked by Dire Peril. 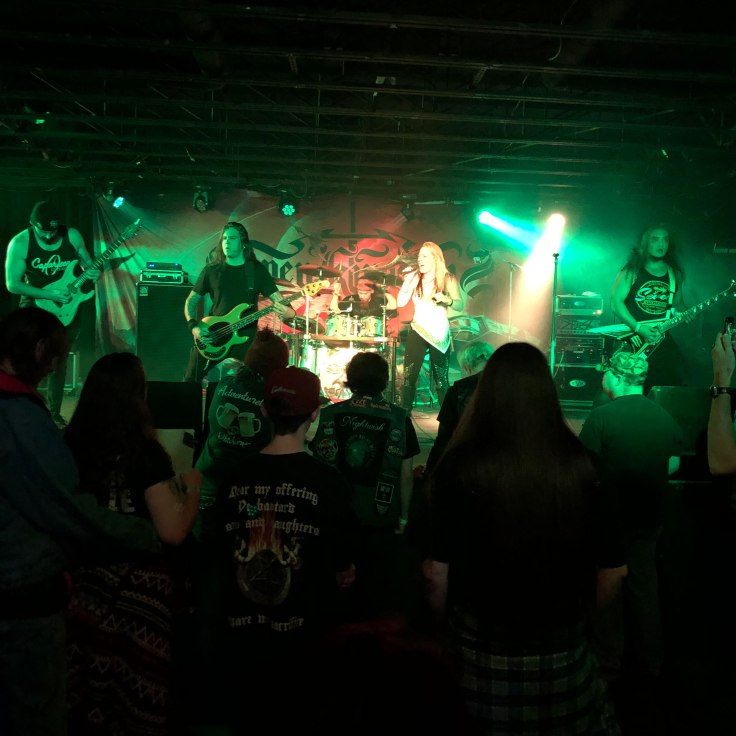