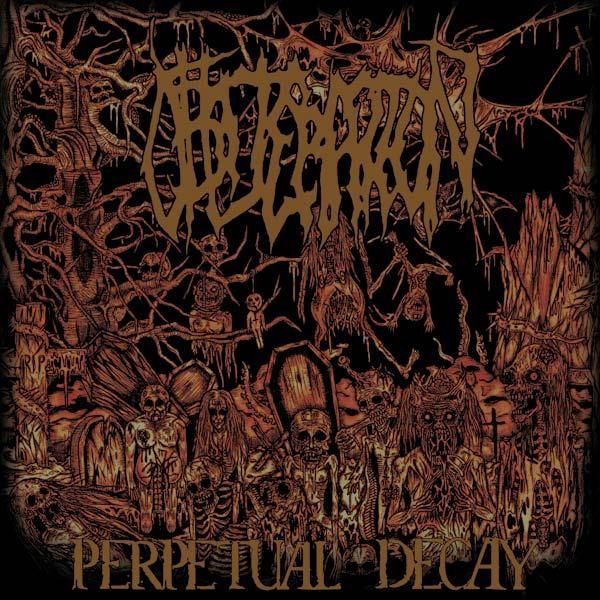 I was recently going through my iPod (yes I still jam my iPod, all the fucking time) to make some extra space for new stuff and I ran across Obliteration’s 2013 album Black Death Horizon and instantly remembered all the buzz and praise around that album that year. Hell, I dug that album a lot but for me they were the near the breaking point for me with the modern “old school death metal” (OSDM) sound that just fucking exploded all over the place and dominated the genre, even somewhat to this day. I got sick of that real quickly and I felt Obliteration was an innocent bystander of that. I even got Perpetual Decay around that time and never listened to it. Until today, that is.

2007 might have been ahead of the pack for the OSDM sound but yeah, this surely is that in spades. While that sound, at least to me, is so fucking played out nowadays, Perpetual Decay is more like a blender full of all the old school death metal sounds. Typically, and I think one of the main reasons the style is so played out is because bands focus on sounding like one band, or one style IE classis Swedish death metal or Autopsy worship. This has old Autopsy groove, Altar of Madness despondence, early Suffocation tech nastiness, and even some Cannibal Corpse riff madness, to mention just a few. It’s like a best of old school death metal through a Norwegian sensibility. It’s pretty fun, actually, and pretty invigorating. Sure it’s all homage and worship but with the focus on EVERYTHING it’s not as stale or repetitive, which for me makes this a pretty good “when I’m in the mood” album.