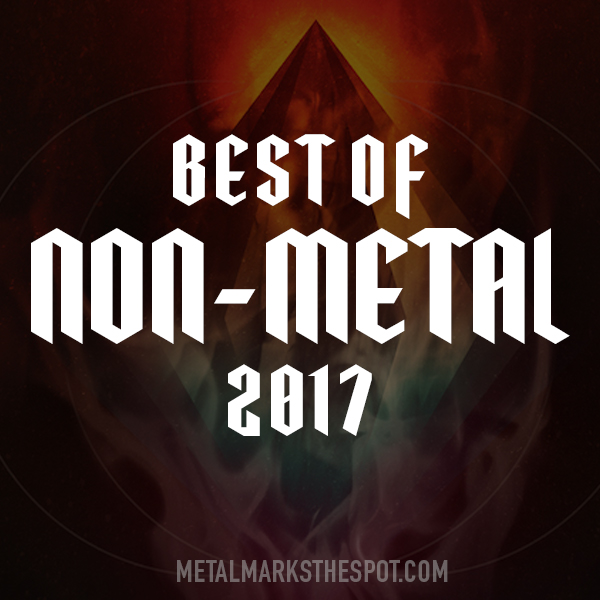 List-o-mania season is upon us and who am I to fucking deny? It’s all the rage nowadays to talk shit about these lists and the the intent of them and everybody wants to be the guard of the “like what you like” mentality but I don’t give a fuck. My interest in these lists is finding new music and inevitably I do, every year, thanks to everybody sharing their own personal lists. It’s like a version of Christmas that is just all good will for music. So that’s my intent, just to share, just to hope people find some good stuff. I don’t think my opinion is better or that I have better taste in music than anybody else. It’s just a list. Don’t cry. Just listen.

That being said, I always start of with my non-metal picks because it’s not always metal going in my ears. I always make an effort to find more non-metal music every year and I feel like I fail every year so here’s to next year where I’ll make the same promise to myself.

1. Kimi Karki – Eye for an Eye
Kimi Karki, or maybe better known as Peter Vicar from the awesome Reverend Bizarre, released his second solo folk album this year and blew my little mind apart. Far from the weird and strange doom he’s known for, this is a more somber, intimate side of the man and the music is downright unforgettable. And as if that wasn’t enough, Patrick Walker from the fucking insanely amazing Warning and 40 Watt Sun makes an appearance on the song “Beyond Distance” which might be the best song I’ve heard all year, anywhere. This album is a beautiful masterpiece from an unexpected source.

2. Chelsea Wolfe – Hiss Spin
I’m not sure what you call Chelsea Wolfe’s music. It’s equally dark, moody, post, emotive, electronic, folk, and heavy. Speaking of heavy, she’s always sort of circled metal in tone and theme and I know she’s well received among many metal fans and bands (recently appearing on the new Mutoid Man album) but on this album I think she takes a much deeper step into metal waters. Like I said, it’s not metal, per say, but she does get much heavier on this album, utilizing heavy, metal sounding guitars and drums, and even features some guttural vocals courtesy of Aaron Turner of Isis. It doesn’t dominate the album, which is of course is a dark and moody journey through sound and emotion with Wolfe’s unique and powerful voice. It’s another incredible album from a truly gifted artist so if you aren’t on the Chelsea Wolfe train, you probably should be.

3. Eneferens – Eventide EP
Main man Jori Apedaile recently moved to Minnesota and to thank him they burgled his place and made off with a bunch of his musical gear, which fucking sucks. So Jori offered up an acoustic EP for donations to help raise money to pay his insurance premium. Typically he’s working in highly composed and beautiful atmospheric black/doom metal but all that’s stripped down and focussed just on his songwriting, which is breathtaking. There’s also a soul stirring cover of 40 Watt Sun’s “Restless,” which gives the original a run for it’s money. It’s that fucking good.

4. Royal Thunder – Wick
With their two previous releases Royal Thunder has proven to me that whenever they put something new out it’ll be worth a listen. This metal adjacent band keeps writing top notch songs with a bluesy, doom-ish swagger, and killer riffs. Damn does Miny Parsonz voice just keep getting better and better. So close to metal but regardless of genre, this album fucking rules.

5. Jason Isbell – The Nashville Sound
I’ll take Jason Isbell’s solo career a million times over Drive By Truckers any day of the week. His soft country, alt-county, folk bent stylings and free reign as a solo musician lets him fly unchained and you get some glorious music like this new album which does find him leaning a bit on the more rock side of his previous band but also experimenting more with his sound like the bombastic guitar explosion “Anxiety.” Fucking beautiful album and musician.

6. The Smith Street Band – More Scared of You Than You Are of Me
Folk music heavy, British angsty, punk rock. You can definitely tell this band are Frank Turner fans from the strong story telling aspects and insightful observations and a similar style of natural flowing lyrics like it’s a conversation. Good heart sting pulling, nostalgia heavy, remember the good ol’ days kind of songwriting, but with a gargantuan amount of catchiness and a frantic emotional scope going from highs to dismal lows.

7. Propagandhi – Victory Lap
Propagandhi sent me for spin with their 2012 Failed States album as I remembered them as a goofy, pop, skater punk band from my own skater punk days (90’s cough cough) so when I heard that album and their seriously heavy metal influenced and more sincere and serious sound I couldn’t believe my ears. That album was so excellent and one of the best punk albums I’d heard in a very, very long time. I’ve eagerly been awaiting a follow up and now it’s here with Victory Lap. While it’s not Failed States it’s still fucking awesome. The band has fused in some of their more melodic and pop-centric styles will not getting goofy but still maintaining their harder edge. It works to some degree but the more poppy punky songs really stick out against the harder, politically motivated and more metal driven focus of the sound. It’s been popping up on a ton of “best of metal” lists and I’m not prepared to call this a metal album entirely, but it’s a fucking great album nonetheless.

8. Nothington – In the End
Ever since Nothington ditched the Social Distortion rip off style they’ve put out nothing but consistently good pop-punk records. I’m addicted to their blue-collar, down to earth punk rock vibe and goddamn if they can’t write some of the catchiest tunes. Simple, fun, good punk rock.

9. Hot Water Music – Light It Up
This may be Hot Water Music’s most diverse sounding album to date as they incorporate more sounds and elements into the mix than ever before. Their rough and tumble, dirtier pop punk sensibility is still at the core but they’ve thrown in some 80’s hardcore vibe, some Replacements new wave punk straight rock attack, even pop-ier punk, and Chuck’s solo, folk/country styled music has seeped into the mix, at least the emotional and structure parts. It’s kind of a mix of everything I love about Chuck Ragan and his music all wrapped up in one album. I still prefer his solo stuff but this one is scratching that itch something fierce.

10. The White Buffalo – Darkest Darks, Lightest Lights
The White Buffalo continue their darker, rock infused, rebel country style. Precise and to the fucking point, the new album rolls in at 34 minutes and packs more songwriting prowess and emotion than most albums of this ilk twice as long. Some good heartache-ers, some boot stompers, and some country grit, these guys seemingly can’t do any wrong.

11. Torgeir Waldemar – No Offending Borders
Some absolutely beautiful, soulful, singer/songwriter folk music with a bit of rock/classic rock influence added in. If it weren’t for his name, I’d never have guessed based on the music that this was Norwegian. It sounds so authentically American.

12. The Dopamines – Tales of Interest
Some good pop punk without a sense of pretension, sloppy, straight forward, and catchy as fuck. Not that crappy pop punk that is in Hollywood movies or tv commercials. Good fun, good songs and good times.

13. Anathema – The Optimist / Daniel Cavanagh – Monochrome
Anathema don’t tread new ground here, and I didn’t expect they would, nor do I hold it against them since they do their brand of ethereal, enchanting, post rock whatever so well it hardly matters. There’s some sort of highway, driving, radio theme going on here with different references to them and some radio audio clips. Not sure what they’re going for here but like I said, I don’t care because the music is so good.

Daniel Cavanagh is one of the main writers and musicians for Anathema, and if you didn’t know that going in to his solo album, you would immediately after hearing the first song. Now I know Anathema haven’t been a metal band for quite some time but they still have some “heavier” moments to balance the tranquil, ethereal soundscape songs. This album is all the ethereal, beautiful moments. I’m not sure why he needed a solo project to do this as it sounds EXACTLY like Anathema, but I’m an Anathema geek and I love all facets of their style and sound so I’ll gladly take more in any way.

14. Chris Stapleton – From a Room: Vol 1 & 2
I rather enjoyed Stapleton’s previous album and his straight up, classic country styling. These new albums are that classic country sound stripped down to the bare essentials. Mostly just his guitar some backing, and that voice. Damn good if you like legit country.

15. Argyle Goolsby – Darken Your Doorstep
I’m not going to miss anything Argyle Goolsby puts out and that’s just that. As far as I’m concerned he’s one of the last few remaining horror punk bands I give a shit about, and he’s clearly doing it the best. If you know Goolsby’s brand of infectious pop infused punk you’ll find nothing different here, except exceptionally melodic and catchy songs about horror movies. Exactly what I want and expect from him.