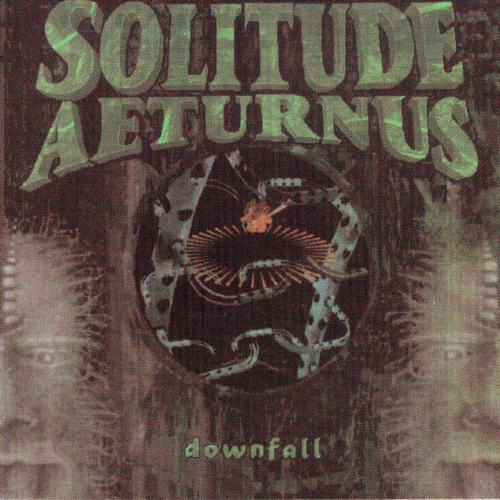 I’ve always thought of Solutide Aeturnus as the heavier, American version of Candlemass, and maybe that’s because I heard vocalist Robert Lowe’s amazing vocals first on Candlemasse’s Death Magic Doom album (one of my favorites of the band) before I’d even heard of Solutide Aeturnus. Yeah, I know, I was late to the metal game, but I think the American Candlemass is a suiting and empowering label for this band, especially considering how epically amazing their “epic” doom metal is.

After three stellar epic doom albums, on their fourth album Downfall  the pendulum swings a bit from the longer, dirge-ier, songs to a leaner, more riff-centric approach. I think the “epic” nature of the band is put on the back burner a bit, just a bit, in place of some more experimenting. I’ve seen reviews saying they went “alternative” or even “grunge” on this album, and while those genres were all the rage of 1996 and a lot of metal bands were changing up their styles, I’m not sure Solitude fully embraced that, more so dabbling just a little bit. I think you’d have to be ludicrous to call this an alternative or grunge album but the songs are more reigned in and there’s some dirtier riffing, song progressions, and some odd, computerized song effects going on. It seems “poppier” for lack of a better word but still firmly, firmly fucking rooted in Solitude’s crushing doom power.

Yeah, it’s a bit different for the band, but in no way is it bad. It’s a fucking killer album through and through and you’ll find little time where you aren’t banging your head to it’s power. Simply put, Solitude Aeturnus fucking rules and you need to get on this band if you haven’t yet.