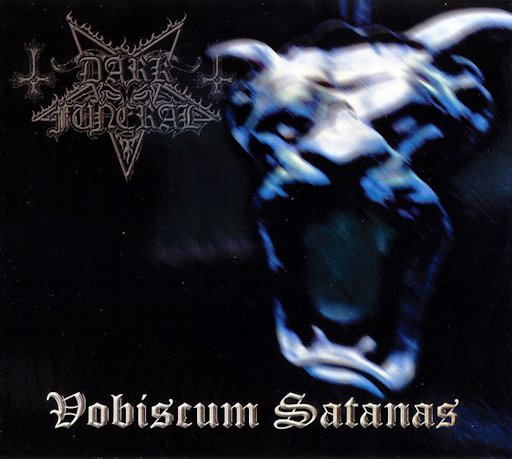 Dark Funeral is not one of my favorite bands, yet I’ve now heard all of their albums. I’m not sure I’d even rank them in my top 50 band list, as if such a thing exists, but I do enjoy them. For the most part, I guess. And I think that’s kind of how they are perceived. I’ve never heard anybody proclaim Dark Funeral to be their favorite band but they do enjoy a certain level of prestige. They also seem to take some flack as well. Regardless the band is a mixed bag of music and perception but they do have some gems hidden in their history.

I’ve heard a theory that the albums with the blue art are the good Dark Funeral albums, and the ones with the “red” artwork are the bad ones, and after last years return to form album (which was blue) that followed the “red” albums, I might put some faith in that purely cosmetic observation. This album is their second release and also features a “blue” cover, albeit probably their least visually interesting cover. That aside, Voviscum Satanas is pure violent, icy-cold, satanic-ful black metal through and through. On this album the band ups the melodic riffing 1000 fold and it pushes them near Dissection worship territory, (something bands like Thulcandra do to great affect) but they build their own ever present evil atmosphere based on that ferocity.

This is an immaculately produced and mastered album and it’s very much in your face and loud, which I think is what gets this band negative attention. It’s very polished and very clean, which is an odd thing to say considering the diabolical and frozen atmosphere they album projects, but production wise, it’s squeaky clean.

After this album they dive into the “red” phase and the more ludicrous era of the band and I won’t comment on that, however, this album might be the bands most manic and violent release, and perhaps, their best. And you know, it’s Swedish so you can’t really go TOO wrong there.