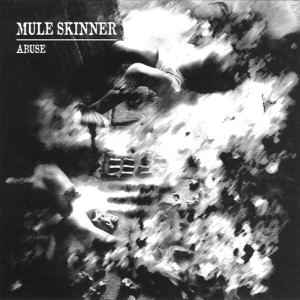 I am not a Grind guy. Nothing against the genre, I think it’s a perfectly legit and fruitful genre, I just don’t get into it the same way as the other metal genres. Aside from some of the more well known bands and albums, plus some personal favorites here and there, it’s a genre I generally don’t listen to much or pay much attention to. Perhaps I need to spend some more time with Grind as a whole and explore more but as of now, it’s still on the fringes for me.

But sometimes. Some fucking times, Grind just hits the god damn spot and makes everything better.

Such is the case with Mule Skinner’s 1996 album Abuse. Shared with no explanation by my buddy Ben, I looked up the name on Metal Archives and saw “death/grind” as the genre tag and threw it on the headphones. It’s exactly that. More on the grind side of things but that slight death metal influence makes all the difference, at least to me. It adds a nice flavor and keeps the songs from all sounding so similar, one of the drawbacks I have with Grind.

What then caught my eye (ear) was that this came out in 1996. I for sure thought this was more recent but fuck no, this band was tearing this up back in 1996, back when the established grindcore bands were going full on death metal. Mule Skinner kept to it and released this, their one and only album before calling it a day and going on to Flesh Parade, a band I’m not familiar with but could be popular with the Grind crowds for all I know.

Aside from that, this album fucking slays. Head banging Grind told in 23 songs in 35 minutes, in true Grind fashion. Just put this on and bang your head away to the killer, energy packed songs.