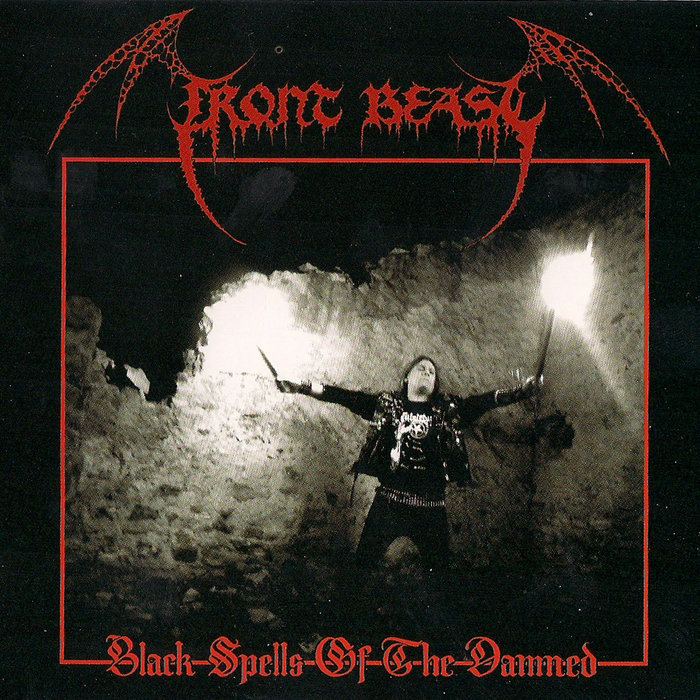 I feel like it’s been awhile since there’s been any black metal on this site and I aim to fucking fix that right… now.

Front Beast is the the one-man black metal adventure from Avenger, who is also in at least a million other bands, none of whom I’m familiar with, seems to be his most prolific. Since the bands inception in 1999, Avenger as Front Beast has released a little over two dozen releases, three of which are full-lengths and Black Spells of the Damned is the first of those.

The thing that you will notice immediately is the lo-fi production, nothing new for black metal but used to great affect by Front Beast. To me, this album sounds insane and the lo-fi atmosphere lends to the insanity. Like they let a mental patient, with musical prowess, loose in a recording studio. No, it’s not avant-garde or unlistenable experimental black metal. In fact, the songs are quite catchy, melodic, and well composed, but the whole things just sounds fucking crazy. The guitar sounds slightly out of tune or played through a weird effect and is only second in the mix to Avenger’s wild and moderately insane vocals. It gives the band an actual unique presence and sound.  It’s actually somewhat refreshing. It also uses some thrash and dark metal influences. There’s even some punk moments on display. The whole thing is just bonkers.

This may not be for the new black metal convert but it’s a unique and interesting listen nonetheless. Give this one a go.

You can get the album for like $2 on Avenger’s Bandcamp page.