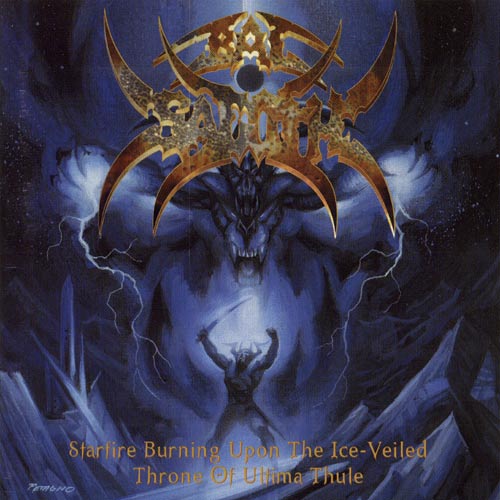 Remember last week (or the week before) I reviewed the first Bal-Sagoth album A Black Moon Broods Over Lemuria, and the first of the Cacophonous remastered, CD re-releases? Well now it’s time to focus on the second of the re-released bunch and the bands sophomore album, Starfire Burning Upon the Veiled Throne of Ultima Thule (yes!).

Black Moon found a more reserved Bal-Sagoth (if there’s such a thing) whereas Starfire gets to all the things that make Bal-Sagoth so awesome. That’s the thing about Bal-Sagoth, they go all in on their sound. Why just paddle around in the waters of epic metal when you can be the fucking waterfall that fills the lake. And that’s exactly what Bal-Sagoth achieves on this album. Full on fucking epic metal. They take black metal, death metal, power metal, and some classic/doom and mash it all up with a concept album based in their own fantastical world, then just throw it out there all “take it or leave it, this is what we fucking do.” Love the brazen balls on this band.

And can we talk about the song titles. This album is where they first start using those epically long titles. “To Dethrone the Witch-Queen of Mytos K’unn (The Legend of the Battle of Blackhelm Vale)”,”And Lo, When the Imperium Marches Against Gul-Kothoth, Then Dark Sorceries Shall Enshroud the Citadel of the Obsidian Crown”, and “In the Raven-Haunted Forests of Darkenhold, Where Shadows Reign and the Hues of Sunlight Never Dance”, are perfect examples. I’d love to hear these names called out live.

Fucking Bal-Sagoth rules. Embrace the epic-ness or get the fuck out.