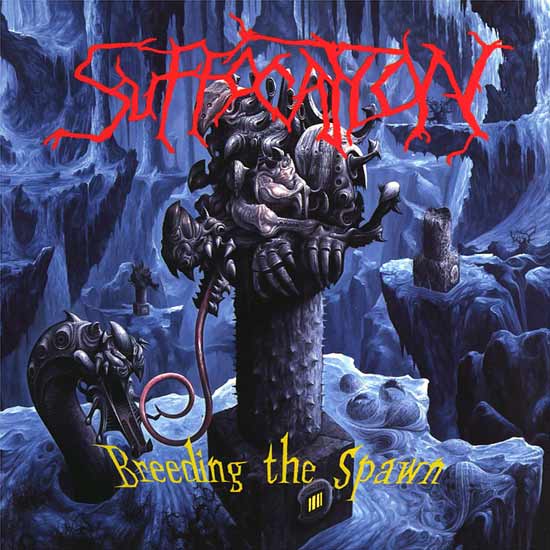 I felt like having my skull smashed open and my brains stomped on by death metal this afternoon so I figured I would give the second Suffocation album a spin.

As you may know the name Suffocation rings heavy in the halls of death metal mastery. They were one of the first bands to combine the crushing power of death metal with an extremely technical and progressive style. There’s also some that would say their original lead singer helped to innovate the death metal growl. That’s a topic I don’t care to weigh in on but Suffocation, at least their earlier works, are crucial.  Their first album Effigy of the Forgotten and their third album Pierced From Within are held in high esteem and are the albums most commonly referred to when talking about Suffocation. But what about their second album? There seems to be a ton of varying opinions on why this one seems to be so overlooked from record label politics to the production sound but I think this one should rank up there with the other two. Yes, the production sound is a bit thinner and weaker but looking past that, this album is full of everything that makes early Suffocation great. The incredible break neck technicality and speed, the crushing vocals and the hammering drum sound. It’s like the perfect in between album as all of the first album sound is there and they add a bit more melody which would become more prevalent on the third album.

Whatever the reason maybe, this album is fucking killer. If you’re not familiar with Suffocation, maybe start with their first or third album, but then immediately put this one on. Classic American death metal.