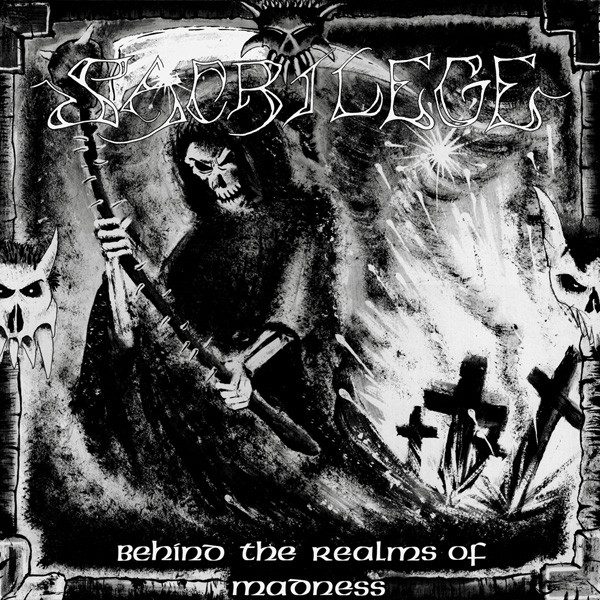 Reissues seem to be all the craze and there have been some true hidden gems that are finally getting the time in the light they deserve. Take this reissue of Sacrilege’s Behind the Realms of Madness. Relapse Records has remastered and added to the original 1985 release and shared with the world a pretty fucking rad album.

Sacrilege’s story is an interesting one as they started off in the UK amidst all the extreme metal coming from that region as a crust, thrash crossover band. They followed this album with a more thrash focussed album and then followed that with a doom album. This being their first album, their foot was firmly planted in the crust or “proto” crust sound coming out of the UK at the time, but with the savagery and riffing of those early European thrash bands. Think early Kreator or Destruction. The punk and crust aspect keeps the band from going full on thrash but you get the idea.

Atop the fury of the music you have Lynda “Tam” Simpson delivering some incredible vocals. Her voice is both equally punk and metal at the same time. She fucking kills it on this album.

It seems this album has gone under the radar for so long and while listening to it I can only assume it was a victim of the times. It’s not quite crusty enough for the crust crowd, where at this time Amebix was defining the genre, and it’s not quite thrash enough for the head bangers. It doesn’t prescribe to the social and political leanings of the crust scene or the raucous hate and violence of the Euro thrash bands of the time. It’s goes for a darker, more fantastical approach with songs about Lord of the Rings or the horrors of death, things that seem more suited for doom metal, which is where the band eventually ends up.

Behind the Realms of Madness is a killer fucking album though. Nasty in all the right punk ways, and shredding in all the thrash ways. It’s an interesting portrait from that time in the genre and well worth taking the 26 minutes to investigate.