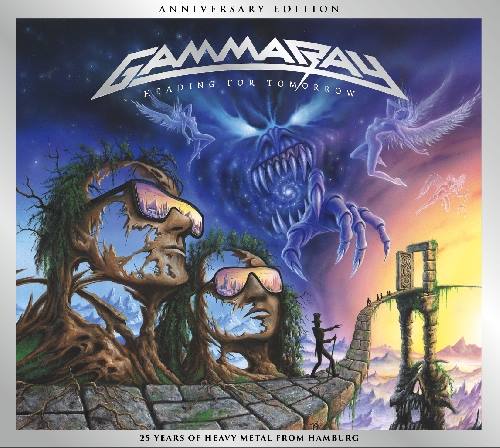 I spent the majority of this morning deep into the new My Dying Bride and new Skepticism albums. While both are fucking fantastic, you can only take so much doom at once and I needed something airy and light to cleanse the palette. Luckily I saw that there was a recently released, remastered version of the very first Gamma Ray album from 1990. That’ll do.

Now, for those of you unfamiliar with Gamma Ray, the band was started in 1989 by guitarist extraordinaire Kai Hansen, considered by many to be the “grandfather of power metal,” after he left Helloween on the tail of the Keeper of the Seven Keys albums, which if you haven’t heard, are absolute classics and to me, the foundation of what power metal is built on. While Gamma Ray was originally intended to be a solo project for Hansen, it evolved into a full time project that continues to this day (their last album from 2014 Empire of the Undead was some good fun).

While one might expect Gamma Ray to have a Helloween style sound, and it’s hard not to draw comparisons given Hansen’s ridiculous zanny and adventurous guitar playing, Gamma Ray approach power metal from a more entertaining and “fun” approach. It’s hard not to get swept up in the sheer amount of amusement provided by this band and it’s plain that all involved were having such an enjoyable time which is probably just what Hansen needed to wash the dirt off from exiting Helloween.

Like all great power metal, the songs are catchy as fuck, sung masterfully by Ralf Scheepers. While Hansen has an incredible power metal voice as well (he would take over as lead singer of Gamma Ray in 1995), Ralf is no slouch and his over the top, singalong ready vocals perfectly match the bands, bombastic, soaring, cheese-a-rific European power metal stylings.

Now, while I don’t think this debut album quite reaches the height of power metal excellence as their later albums Land of the Free or No World Order!, it set the path for what was to follow and could easily rank just under those two albums. The remastering sounds incredible and gives the album a more timeless quality and ups all the sound and production value in a way that best represents the music and makes it an album to experience, how all good power metal should sound.