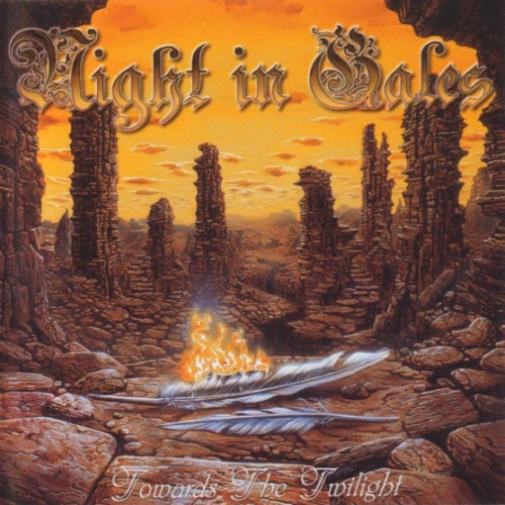 If you just saw the name of this band and the cover to this album you might automatically assume it’s power metal. It has all the trappings of a mid to late 90′s power metal album. The somewhat tongue cheek, cheesy name, the fancy metal rendered, script like band name and a painted fantasy landscape with burning feathers. This could easily be a Sonata Arctica album cover. Alas, it is some seriously catchy and well executed melodic death metal. Based on hearing the music you might assume they’re from Sweden. Nope. Germany. While the Swedes may have invented and perfected this style of metal there are bands from other countries that do it justice and Night in Gales is one such band. I mentioned power metal and and given power metal’s popularity in Germany it’s hard not to say there isn’t a bit of power metal influence in this band, or in melodic death in general, but that’s another discussion. All the core ingredients for a killer fucking melodic death metal album are present on this album. Fucking amazing, emotional guitar riffing, focus on the death metal part, soaring solos. The only part that leaves me a little flat is in the drumming. Not that is bad, it’s just fairly standard. The album still fucking rips.